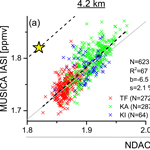 The MUSICA IASI CH4 and N2O products and their comparison to HIPPO, GAW and NDACC FTIR references

Abstract. This work presents the methane (CH4) and nitrous oxide (N2O) products as generated by the IASI (Infrared Atmospheric Sounding Interferometer) processor developed during the project MUSICA (MUlti-platform remote Sensing of Isotopologues for investigating the Cycle of Atmospheric water). The processor retrieves CH4 and N2O with different water vapour and water vapour isotopologues (as well as HNO3) and uses a single a priori data set for all the retrievals (no variation in space and time). Firstly, the characteristics and errors of the products are analytically described. Secondly, the products are comprehensively evaluated by comparisons to the following reference data measured by different techniques and from different platforms as follows: (1) aircraft CH4 and N2O profiles from the five HIAPER Pole-to-Pole Observation (HIPPO) missions; (2) continuous in situ CH4 and N2O observations performed between 2007 and 2017 at subtropical and mid-latitude high-mountain observatories (Izaña Atmospheric Observatory and Jungfraujoch, respectively) in the framework of the WMO–GAW (World Meteorological Organization–Global Atmosphere Watch) programme; (3) ground-based FTIR (Fourier-transform infrared spectrometer) measurements made between 2007 and 2017 in the framework of the NDACC (Network for the Detection of Atmospheric Composition Change) at the subtropical Izaña Atmospheric Observatory, the mid-latitude station of Karlsruhe and the Kiruna polar site.

The theoretical estimations and the comparison studies suggest a precision for the N2O and CH4 retrieval products of about 1.5–3 % and systematic errors due to spectroscopic parameters of about 2 %. The MUSICA IASI CH4 data offer a better sensitivity than N2O data. While for the latter the sensitivity is mainly limited to the UTLS (upper troposphere–lower stratosphere) region, for CH4 we are able to prove that at low latitudes the MUSICA IASI processor can detect variations that take place in the free troposphere independently from the variations in the UTLS region. We demonstrate that the MUSICA IASI data qualitatively capture the CH4 gradients between low and high latitudes and between the Southern Hemisphere and Northern Hemisphere; however, we also find an inconsistency between low- and high-latitude CH4 data of up to 5 %. The N2O latitudinal gradients are very weak and cannot be detected. We make comparisons over a 10-year time period and analyse the agreement with the reference data on different timescales. The MUSICA IASI data can detect day-to-day signals (only in the UTLS), seasonal cycles and long-term evolution (in the UTLS and for CH4 also in the free troposphere) similar to the reference data; however, there are also inconsistencies in the long-term evolution connected to inconsistencies in the used atmospheric temperature a priori data.

Moreover, we present a method for analytically describing the a posteriori-calculated logarithmic-scale difference of the CH4 and N2O retrieval estimates. By correcting errors that are common in the CH4 and N2O retrieval products, the a posteriori-calculated difference can be used for generating an a posteriori-corrected CH4 product with a theoretically better precision than the original CH4 retrieval products. We discuss and evaluate two different approaches for such a posteriori corrections. It is shown that the correction removes the inconsistencies between low and high latitudes and enables the detection of day-to-day signals also in the free troposphere. Furthermore, they reduce the impact of short-term atmospheric dynamics, which is an advantage, because respective signals are presumably hardly comparable to model data. The approach that affects the correction solely on the scales on which the errors dominate is identified as the most efficient, because it reduces the inconsistencies and errors without removing measurable real atmospheric signals. We give a brief outlook on a possible usage of this a posteriori-corrected MUSICA IASI CH4 product in combination with inverse modelling.